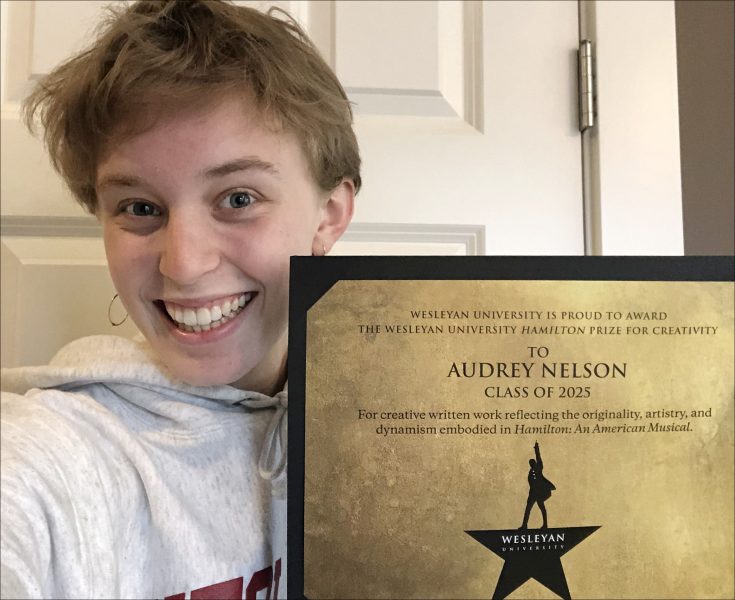 "For the fifth consecutive year, Wesleyan University has awarded its prestigious Hamilton Prize for Creativity to three students whose creative written works best reflect the originality, artistry, and dynamism of Hamilton: An American Musical, created by Lin-Manuel Miranda…

“For the fifth consecutive year, Wesleyan University has awarded its prestigious Hamilton Prize for Creativity to three students whose creative written works best reflect the originality, artistry, and dynamism of Hamilton: An American Musical, created by Lin-Manuel Miranda ’02, Hon. ’15 and directed by Thomas Kail ’99.

“Audrey’s ‘Complications’ was delightful and surprising at every turn: in structure, in subject matter, in its evocative language,” Miranda said. “I wanted to read more from this writer immediately.”

Alumni judge Craig Thomas ’97, co-creator of the TV sitcom “How I Met Your Mother” favored the “poignant magical realism” of Nelson’s prose. “The piece was impressionistic, spare, and quite moving, which is hard to do for a writer of any age, much less someone so young,” Thomas said.

In addition, Wesleyan awarded two $5,000 stipends to honorable mentions winners Nolan Lewis ’25 of Washington, D.C., for his collection of songs/spoken word, and Cecilio Munoz ’25 of Worcester, Massachusetts, for a screenplay titled “The Greatest Generation.”

The winning works were chosen from a pool of 345 submissions. Faculty members reviewed the initial entries, after which an all-star selection committee of Wesleyan alumni in the arts, chaired by Miranda and Kail, chose the finalists.

After reading Lewis’s lyrics, actress Beanie Feldstein ’15 was confident that “this kid is going to be a star one day.” Said Feldstein, “It feels like Nolan’s music seamlessly enters the world, like a magic spell with thought-provoking, clever and impactful lyrics and rhymes.” And marketing guru Bozoma Saint John ’99 found Munoz’s “heart-warming” screenplay “captured the impact and confusion of childhood trauma really well, while relating to the reader.”

The Wesleyan University Hamilton Prize for Creativity was established in 2016 in honor of Miranda and Kail’s contributions to liberal education and the arts and named for the pair’s hit Broadway musical, which won 11 Tony Awards, including Best Musical, Best Direction of a Musical, Best Book, and Best Original Score.”