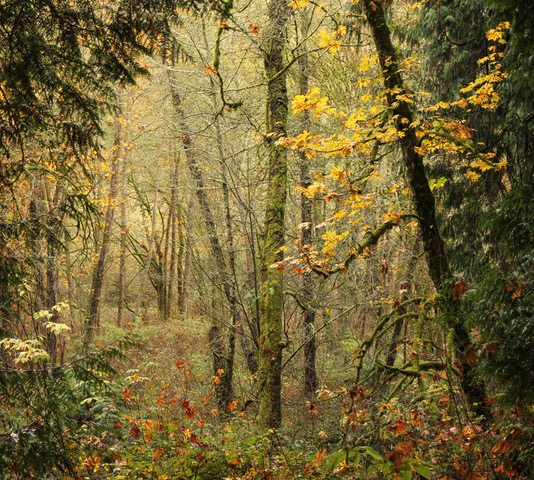 Impressionist Scene on the Blakely Harbor to Fort Ward Trail. All photographs taken by Paul Brians.

Just about everybody loves fall colors, and I am sometimes asked where the best places are for seeking them out on Bainbridge. The first thing I tell them is that most of our native deciduous…

Just about everybody loves fall colors, and I am sometimes asked where the best places are for seeking them out on Bainbridge. The first thing I tell them is that most of our native deciduous trees turn various shades of yellow or brown, and they should not expect the brilliant display of a classic New England hillside. But the truth is that brilliant reds and purples are around if you know where to look, though perhaps not on the plants or in the places you might expect.

I won’t be identifying all the trees here—suffice it to say most of them are various sorts of maple. If you are searching for something colorful to put in your yard this is a good time to visit one of our local nurseries and see what’s on display. October is usually the peak month for fall color.

I’m always looking for colorful autumn displays on the trees in Battle Point Park. At the end of October 2018 I encountered this remarkable array. I’ve never seen anything quite like it since.

The earliest shot in this collection was taken in 2009 shortly after we moved to Bainbridge and is included in my photo book Four Seasons on Bainbridge Island. You can make out behind the foliage the edge of the theatre building at the left.

My favorite tip to those looking for brilliant displays is to check out parking lots, like the one adjacent to City Hall where I captured this shot in 2016.

The contrasting foliage on these overlapping trees at the entrance to the park created a stained-glass window effect. Taken 2011.

Impressionist Scene on the Blakely Harbor to Fort Ward Trail

This 2016 shot made it into the book Natural Bainbridge, published by the BI Land Trust.

This 2016 display in the Grand Forest Northwest struck me as a lovely quilt of foliage.

In mid October 2015 Between appointments I took 60 minutes to shoot 60 pictures of fall color along this downtown street. This is just a sample. It’s a great place to check out at this season of the year.

The tree-loving owner of this garden has created a spectacular autumn color display on Miller Road. But keep an eye out for speeding drivers using this road as an alternative to 305.

Paula in the Birch Grove

A fall visit to the Bloedel Reserve is always a good idea. Here’s my wife admiring the autumnal display.

Backlit Maple in the Japanese Garden at Bloedel

I love the look of sunlight illuminating maple leaves. Taken 2011.

This view out the doors of the office building at 345 Knechtel way captures the colors of both the tree outside and the collection of glass vases inside (2011). This is the shot displayed on my iPhone when I pick it up.

Circle of Leaves on Lawn

Caption: Some fall face up, others face down, providing an interesting contrast. I spotted this serendipitous circle of maple leaves on the grass in Battle Point Park in early November, 2020.

Stag in Our Backyard

I captured this scene out one of our windows in the fall of 2013. The leaves at upper left are on a Big-leaf maple, but at lower right you can see the brilliant foliage on a couple of peonies. Leaf-peeping need not be confined to trees. By the way, this is our sand filter, created by two designers: one of septic systems and the other of gardens.

This brilliant display on a wall on Sunrise Drive grabbed my attention in 2008.

Blackberry leaves of all sorts can provide some interesting color, but this is the most spectacular such display I’ve ever seen, taken last year in October 2020 at the north end of Battle Point Park.

Fireworks Display Along the Sound to Olympics Trail

This sprig of Oregon grape shining among horsetails caught my eye as we walked past it at the end of August.

We’ve made more than one fall trip to New England partly to view the foliage in the company of friends and relatives. Paula’s cousins took us to this pond near their home outside of Storrs, Connecticut in 2014.

Window View from the Gurneyville Mill in Connecticut

The same cousins took us to see this historic watermill in the countryside. This view is one of my all-time favorites.

Taken on the same trip: the view from Zon Estes’ backyard near Guilford. Zon served as director of the Bainbridge Arts & Humanities Council when we first moved to Bainbridge. The morning mist was just beginning to lift as we were leaving his home, unveiling this classic autumnal New England landscape.

This was taken in 2017 from the backyard of former Bainbridge resident Anne Pell, pianist and founder of the Amabile Choir. She and her family have been enjoying permanent residence there. During the pandemic she’s assembled a virtual ensemble of mostly Bainbridge singers called “Singers Without Borders” whose performances may be viewed onYouTube and she keeps in touch by posting pictures on Facebook daily. In the far distance the Alps are hidden behind the haze on the horizon.